Below is a history of the fire service in the town of Upton, as written by FF/EMT Zachary Ward. To learn more about the Upton Fire and EMS Department, please click the link to visit the municipal website.

A Brief History of the Upton Fire Department

The First mention of the Fire Service in Upton took place in 1751, 16 years after the town became incorporated. Firewards, as they were called, were appointed by the town and given the duty to detect and extinguish forest fires.

In 1833, an engine house was constructed at the cost of $40. It was located on Grove Street across from where the Knowlton Risteen Building sits today. The engine house was built to store a piece of equipment known as “Engine 1”, also referred to as “No. 1”.

In the early 1830s, numerous attempts to officially organize a Fire Department in Upton failed.

The First record of an actual fire in Upton took place in 1836. On the present Glen Avenue, between Hartford Avenue South (then Connecticut Road), and Pleasant Street (then Northbridge Road), a home and numerous outbuildings were found to be afire. An estranged man, Cyrus Vail, had set fire to all his buildings and was nowhere to be found. The following day, the men of “No. 1” found Vail in “Old Zac”, a river across the road.

On April 9th, 1839, the Upton Fire Department was officially organized at a town meeting vote. Each member was to provide his own bucket, and all were paid a yearly stipend of $1.30. 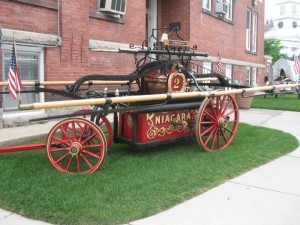 to purchase two new hand pumpers. A committee was formed, and would only be able purchase one. One of the committee members traveled to Boston to make a purchase. The “Torrent”, Boston Fire Departments Engine 16, was purchased. Constructed in 1846, the Hunneman Handtub was housed on East Broadway Street in South Boston, and would make the trip back to Upton to become “Niagara No. 2”, and serve faithfully until 1900. Niagara, as it is referred to today, is a cornerstone of the pride and heritage of the UFD and is currently housed in the lobby at the Fire Station.

In 1900, the town would purchase its first steam engine. “Niagara No. 3”, as it was called, was purchased at the cost of $2,000 from a fire apparatus manufacturer in Upstate New York. The steam engine would only regularly serve for 14 years as in 1914 the Town of Upton purchased the “Dinky”, a Model A Ford. A skeptical town meeting body was stunned as they watched the potential new pumper spray a stream of water close to the top of the steeple of the Catholic Church.

In 1925, tragedy stuck the Town of Upton and its Fire Department. Arthur King, a 15 year Fireman in Upton, was killed when his own home caught fire on Grove Street. Chief Edward Baker, a highly respected Fireman and Chief, immediately saw the need to purchase a new pumper after the tragedy. Chief Baker ordered the 1925 REO Speedwagon, a state-of-the-art triple combination pumper. Tragedy would once again strike Upton in 1925, as Chief Baker perished before the pumper was delivered.

In 1941, Forest Fire Warden and Fire Captain Walter Stank purchased the ’41 Ford, a Forest Fire Truck that due to its fine operability and pump, would find its way first out for house fires as well as forest fires. Such a response would occur the night of Dec 21st, 1944 when the Upton High School burned. Captain Stank along with two other Firemen would arrive “first due” to the high school and dump the trucks 300 gallons of water on the fire, with no effect on the flames. The High School burned to the ground that night. Upton High School students would attend school in Grafton and Northbridge until 1955 when the new Memorial School was built.

In 1952, major improvements would take place in the Fire Department in Upton, all under the supreme leadership of Fire Chief George Napoleon Oliver Poirier. Chief Poirier would be the first of two chiefs from the Poirier family, serving as Chief from 1929 to 1968. Many would say Chief Poirier was ahead of him time. In 1952, Chief Poirier would oversee the construction of a new Fire Station, the purchase of a new pumper, and would be a major voice in requesting town water be provided to the area of Upton Center, a major improvement for water supply at fires. The Chief would take much flack for the location of the new station, many saying it was out of the public sight and was on “Prouty’s Lane”, or up behind the Church. Chief Poirier put the Fire Station there for a reason, being that it was in the center of the town, and apparatus could respond painlessly in any direction should then need arise.

Once again, under the leadership of Chief Poirier, Upton and its Fire Department would overcome three major tragedies. Double Fatal Fires occurred in Upton in 1959, 1961 and 1963. These are all the only recorded fires with more than one fatality in Upton and all occurred in a few short years. The Fires would leave four young children and two adults dead.

Another major fire would occur in 1963. On the night of September 21st, 1963 Lieutenant William Evans, who then resided in West Upton Center, answered his “red phone”. Someone was reporting a fire, and the fire was in the vacant Knowlton School, at the present location of Coach Road apartments.  By the time Lt. Evans arrived, the building was in a ball of flames. Although a major fire occurred in the building, some items were able to be saved, including the Fire Company’s clam bake equipment. Lt. Evans would later become a Deputy Fire Chief, retiring in 1978. 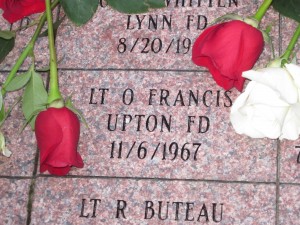 In 1967, the Town of Upton and the Fire Department suffered a major loss. Lieutenant Orrin Francis, a 26 year member of the Department, responded to a fire in a garage on upper Warren Street. Lt. Francis returned home after the fire, only to be stricken ill. Lt. Francis perished that night, leaving a Department and Town that he loved very much. Lt. Orrin Francis is the Departments only official Line of Duty Death. In 2011, a brick was dedicated to Lt. Francis at the Firefighters Memorial at the Massachusetts State House.

In 1969, Captain Walter Stank would become Chief Stank. Chief Stank may have been the most recognizable and well known Firefighter to ever serve in Upton. Chief Stank retired in 1976, and would remain Upton’s Forest Fire Warden until his death in 1991.

In 1976, Deputy Fire Chief Robert Prentiss would become Fire Chief. During his tenure, Chief Prentiss would oversee a major addition to the Fire Station, the purchase of a new Engine and Ambulance, and would push Upton to have the first licensed ambulance in Massachusetts.

In 1978, Henry “Sonny” Poirier, Jr. would become Fire Chief, making him the second Poirier in Upton to hold such a distinction. Under Chief Poirier’s six year term, the Department would gain 15 new personnel after many of the aging membership retired, as well as the towns first set of Jaws of Life.

In 2001, longtime Deputy Fire Chief Michael J. Bradford, Sr. would rise to the top positon in the Department. Chief Bradford, a Chief Officer for over 30 years, continued to bring the Department into the 21st century. Under his leadership, as well as Deputy Chief Richard Henderson and Assistant Chief Michael Marchand, the Fire Department would replace the 1952 Fire Station with a state-of-the-art three million dollar building. Chief Bradford would also oversee the replacement of Engine 1 in 2006, as well as additional career Firefighter/EMT positions to supplement daytime staffing.

In the late 2000’s the Town realized the need to replace the system that governed its Fire Department. Members of the Department, including Deputy Chief Henderson, Assistant Chief Marchand, Captain Leighton, Lieutenant Lazarz and longtime Firefighter Robert Henderson all picked up the torch and transformed the Fire Department as well as EMS Department into what it is today.

On September 20th, 2010 the Fire and EMS Departments were consolidated into one, the Board of Fire Engineers was abolished, and the Department became governed by a single point Chief. Since Chief Aaron Goodale, IV was appointed, the Department has become an ALS (Advanced Life Support) ambulance service, has replaced Engine 2 and Ladder 1 with Tower 36, and has made many additional improvements.

The Department is currently staffed with a Fire Chief, Assistant Fire Chief, Fire Captain, EMS Captain, Four Fire Lieutenants, an EMS Lieutenant, and 32 Firefighters and EMTs, as well as 5 Career Firefighter/EMTs and Paramedics.